Stones have been a presence and recurring material and symbol in my art. They are the subjects of the stone figures that I began with the monumental Human Nature installation at the Rockefeller Plaza in 2013, followed by Seven Magic Mountains in the Nevada Desert in 2016. Both groups are the study and enjoyment of naturally formed stones as objects of beauty and contemplation, and in turn generate personal, meditative states of looking in which the boundaries between the outside world and internally visualized spaces break down. In doing so, I make sculptures of what it means and feels like to see, whether this is understood to be a physical or metaphysical phenomenon.

nuns + monks will continue to address the dual reflection between the inner self and the natural world. Just as the external world one sees is inseparable from the internal structures of oneself, nuns + monks allows such layers of signification to come in and out of focus, prompting the viewer to revel in the pure sensory experience of color, form, and mass while simultaneously engender in an altogether contemporary version of the sublime.

Concurrent to Ugo Rondinone’s exhibition at Galerie Eva Presenhuber, Zurich, the artist will present sculptures from the same body of work at Esther Schipper, Berlin, and Gavin Brown’s enterprise, Rome. A fully illustrated catalogue will be produced for the three exhibitions. 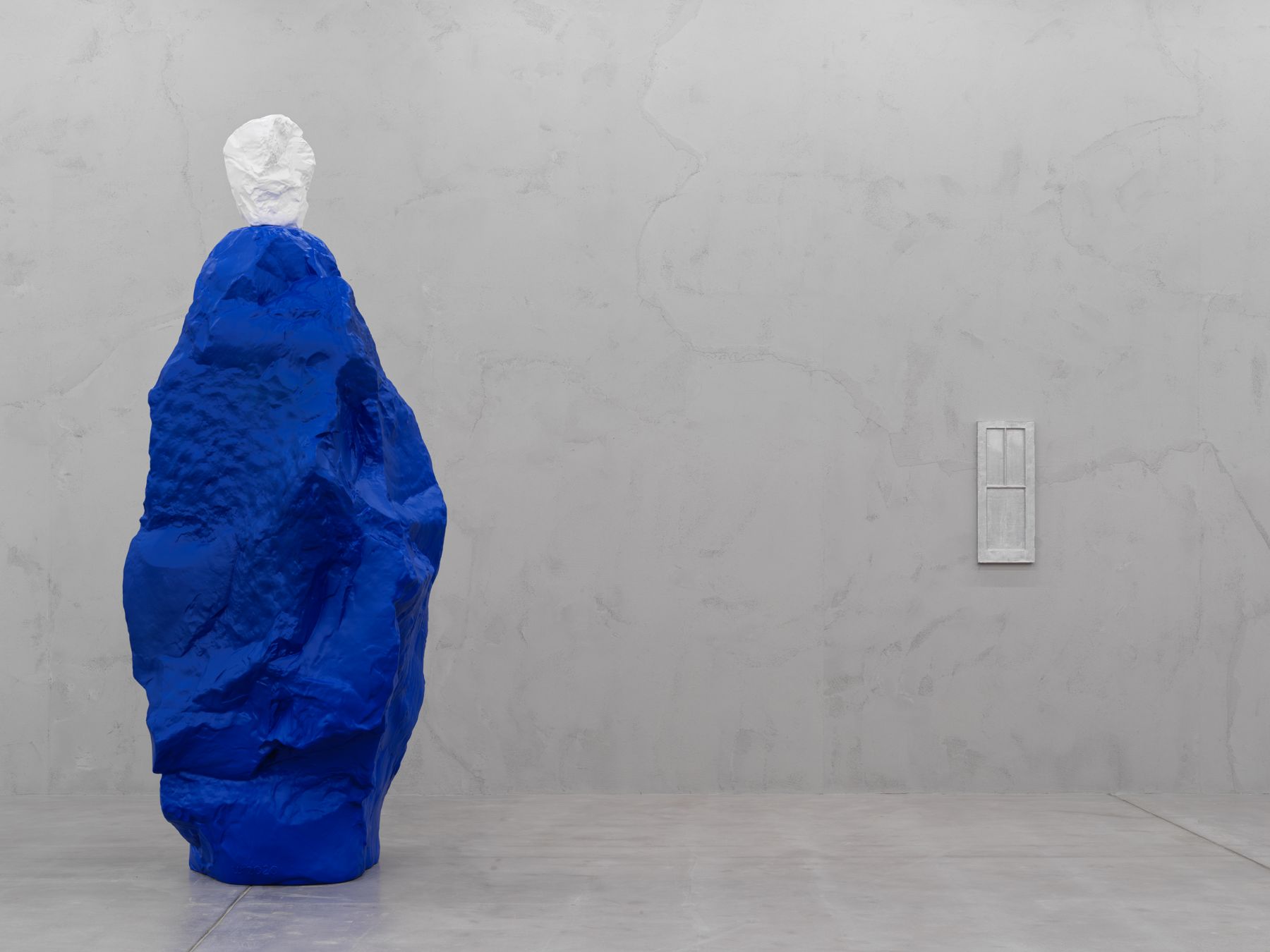 The recent sculptures nuns + monks by Ugo Rondinone take their rightful place in the continuity of a narrative introduced by the artist thirty-two years ago. A narrative composed of chapters that would never cease to interact with one another throughout a trajectory made up of intertextual questions, back-and-forths, survivals, displacements and reinventions of shapes and attitudes, or of interrogations that are constantly being renegotiated. This narrative originated in 1988 with the death of Manfred Kirchner, then Ugo Rondinone’s partner, from an AIDS-related illness. “In the midst of the AIDS crisis, I turned away from my grief and found a spiritual guard rail in nature, a place for comfort, regeneration and inspiration. In nature, you enter a space where the sacred and the profane, the mystical and the secular vibrate against one another.” The resulting works, landscapes with Romantic overtones painted in ink on paper were first shown at the Kunstmuseum in Lucerne, then in several other exhibitions, including one at Galerie Walcheturm in Zurich, always with the same constraint: hung in confined spaces, their windows nailed shut with wooden boards, ‘cut off from the world,’ turned inward. From that point on, the opening up onto nature specific to the landscape found itself counterbalanced by a feeling of enclosure conducive to introspection. And a spiritual turning inward that would find itself perpetuated in the artist’s self-portrait (Heyday), inspired by Joris Karl Huysmans and his fictional character, the reclusive Jean des Esseintes, and shown in the framework of his exhibition Cry me a river, also in Zurich, in 1995. Returned to its initial function, the window of Galerie Walcheturm was once again visible. In front of it was now a brown-painted frame and double pane, which opened like an arched backdrop through which one could see the self-portrait of the artist, portrayed as a passive figure, from the outside. The relationship between content and container, artwork and receptacle therefore responded to an inverted antagonistic principle. But in fine a precarious, equivalent equilibrium had been achieved, from which the spirituality expressed by the artist via the different chapters of the narrative in progress would then unfold.

The nuns + monks sculptures express in turn this dialectic from within and without. From opening up onto the world and from turning inward on oneself. From an introspective gaze combined with an exteriority receptive to nature’s elements of which these sculptures bear the traces. The imprint. Rondinone’s works have never stopped oscillating between extremes, entangling, suspending them. Aufheben.... The sculptures of nuns + monks possess a natural beauty. An “archaic” beauty that evokes other sculptural ensembles by the artist: Human Nature on Rockefeller Plaza in 2013 and Seven Magic Mountains in the Nevada desert in 2016. They manifest visibility yet at the same time seem to avoid the gaze of those to whom they are shown. Their features are indistinct. And in this era of multiple gender identities, they are divested of sexual characteristics, even though their titles allow us to differentiate them. It would certainly be extremely difficult to distinguish the nuns from the monks based on their mere appearance. Wrapped and protected in their cloaks, they seem, like his 1995 self-portrait and the ensuing clowns and nudes, absorbed, in the same way that Diderot characterized the figures depicted in certain paintings by Chardin. Absorbed in what? In whom? In the spectators wandering around them? In the architectural space that serves as the backdrop for their paradoxically motionless choreography? Unless, as is extremely likely, the space in question is mental. Meditative. Transcending the matter that still seems to determine their heft. Or, more than transcended, one could say the matter in nuns + monks is transfigured, revealing a radiance reinforced by the chromatic contrasts, the harmony generated by the juxtaposition of different body parts—the head and the cloak—and by the sculptures, perfectly integrated from one to the next, the abovementioned radiance evoking medieval statuary serving the same religious and spiritual purpose to which the artist is deeply committed. It should be explained that the creation of these works was nourished by Rondinone’s assiduous frequentation of the medieval sculpture department at the Metropolitan Museum in New York, and in addition by a powerful confrontation with Giacomo Manzù’s Cardinals, whose own particular modernity, permeated by a classicism that defies time and categorization, inevitably corresponded to his interest.

Between matter and its negation, these sculptures invest a polarized field. Amphibological. Made in bronze, they were conceived from limestone models, scans of which were “three-dimensionalized” with digital tools. In response to the friable limestone, the solidity of the bronze. In response to the stone’s natural, ancient origins, the here and now contemporaneity of the polychrome castings. Of course, we must, as is often the case in Rondinone’s work, seek the response, ineluctably unstable, inherent in his propositions in the interpenetration of the extremes and intervals they bring about. In a game of equivalences. Opening up onto the world, to nature, and turning inward on oneself. In matter that is as embodied as it is disembodied. And given its elevated spiritual coefficient, so remarkable these days and, in a manner of speaking, absent from contemporary art, in an anagogical principle that re-transcribes and accompanies the process of transfiguration underlying this group of sculptures.

Each work in Ugo Roninone's metal window series is named after a painting by the German Romantic artist Caspar David Friedrich. Instead of diminishing the interiority of the spaces they hang in by allowing us to see outside, Rondinone’s metal windows reinforce a sense of isolation from the external world and provoke  a palpable sense of enclosure. 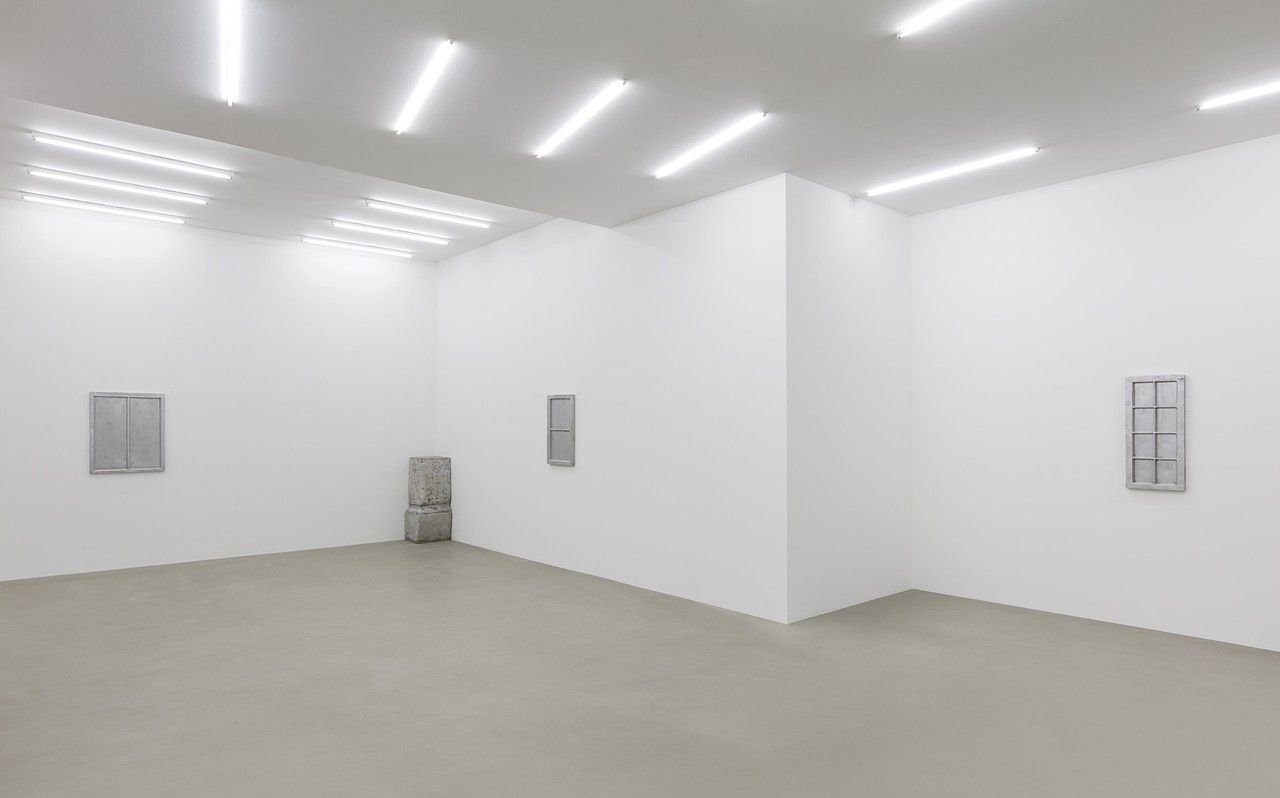 MAN AND WOMAN CONTEMPLATING THE MOON 1824

WANDERER ABOVE THE SEA OF FOG 1818

MAN AND WOMAN CONTEMPLATING THE MOON 1824

WANDERER ABOVE THE SEA OF FOG 1818