Walead Beshty thinks of his work in terms of preexisting constraints, whether that be context, convention, process, or material, and uses these as starting points to produce his work. This methodology applies to the Blind Collage works he began in 2012. While working in various countries and cities, Beshty began collecting newspapers, using them to produce collages on-site during the installation of exhibitions. The selection of newspapers was based on those readily at hand (i.e. what the hotel, gallery, or working environment had available), ranging from tabloid and local papers to the varied formats of globally ubiquitous news providers (for example, in this exhibition, you will notice Beshty’s use of The New York Times from Tokyo, Beirut, and New York, in addition to various regional newspapers). The newspaper is treated as a readymade, one whose aesthetic composition is premised on a form of trust and reliability, an expression of the assumed interests, class, and lifestyle of their readership, as is expressed through the paper’s graphic design, news content, and advertising.

I am always invested in understanding how my work is transformed by the various means through which it is circulated.

To produce the Blind Collage works, he follows a preset arrangement of circular forms, which are cut through the backs of the outspread front page of the newspapers and rotated 180 degrees. Since they are face down, the appearance of the final work is left to chance, resulting in an intermixing of hard journalism, cultural news, and advertising. Beshty relinquishes control of his final product both by using a predetermined sequence of cuts and leaving the selection of newspapers to chance. The handmade cuts inevitably produce small errors and misalignments in the final composition. The result creates a tension between the industrially produced format of the newspaper and its material handling (both the irregularities of the newsprint paper itself and the process used to cut it are subject the work to variability due to the circumstance of their enactment). Beshty embraces the misalignments that invariably occur during this process by filling in these gaps and tears with gold leaf, essentially creating a new form out of the disjunction between the hand made and the industrially produced. This technique is an homage to the Japanese concept of Kintsugi or Kintsukuroi, meaning golden (“kin”) and repair (“tsugi”), in which objects (most often ceramics) are mended with gold; in Beshty’s Blind Collage works, one of the most ephemeral and disposable materials (paper) is bound to one of the most valuable and stable guarantors of value (gold). As a readymade, the newspaper represents (in the artist’s words) an “aesthetics of trust,” through its design, its tone, and even through its advertisements, which each telegraph the publications’ notion of its public. The appearance of gold, is, of course, another signifier of trust.

Beshty’s currency collages take this idea one step further, taking sanctioned certificates of value as a ready-made material, and further making the value of these artworks immediately transparent (the collages are priced at one hundred times the particular banknote’s face value); the tensions between raw material value and representations of value are brought into stark relief. Here, on display, is an aesthetic of trust which fuels an economy, faith in the national banknote (which were once backed by gold or other precious specie), and further allows reflection on how various countries represent those ideas of trust. Each banknote, like each newspaper, presents itself as a testament of faith in the organization it represents, whether that faith is the information it provides (as in a newspaper) or as a holder of transactive value (as applies to the banknote), constituting a form of social contract with its would-be user.

With this thematic of trust as a backdrop, the additional works speak to the failure of systems to fulfill that trust. His sign box works are composed of anonymous solicitations to the poor, desperate, and suffering, in bold and blunt terms. As Beshty describes it, “I began collecting these signs during the credit crisis. They started to appear all over Los Angeles, like a colorful rash on a diseased body. I suppose I think of the works as portable monuments to the cold brutality of capitalism, how it so often cheerfully chooses profits over people, abstraction over life.” The standardized format of these signs, originating from the economic expediency of their producers, allows them to fit together as modular units. The resulting boxes, remade at a 1:1 scale and produced with a painstaking care the originals lack, preserve these fleeting testaments to societal failure.

The screens used to produce the sign box works are repurposed in the screen box works, whose industrial aesthetics provides another wink at the cold anonymity of Minimalism and its appropriation of signifiers of industrial labor (much as the original boxes point to Pop Art’s appropriation of advertising). They also serve as a testament to the conclusion or foreclosure of this series of sign box works; using the screens themselves as artworks guarantees no more of the sign box works can be produced. The boxes are translucent and, like their counterpart sign box works, can be oriented in any manner or stacked upon themselves. This pair of works intermix the histories of Pop and Minimalism, linking both to a play of signifiers and industrial production. 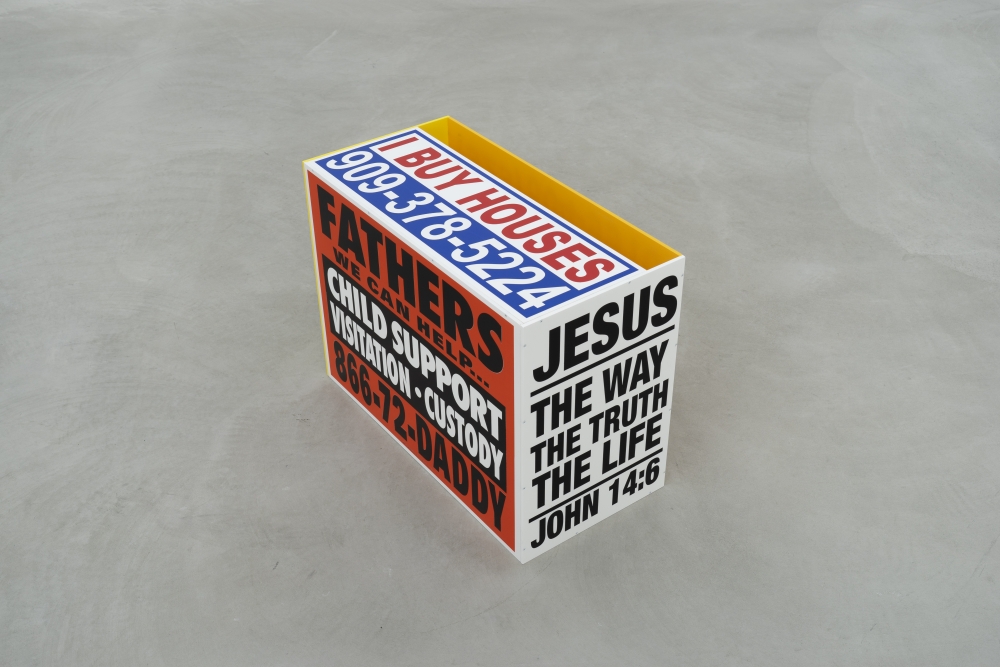 The last element in this grouping is the series of photographs (Temporary) Homes for America… These are photographs of RVs (recreational vehicles) and mobile homes that are decaying on the streets of Los Angeles, photographed in a blunt straightforward manner, betraying no evidence of life except in the objects’ deterioration and their occupants’ improvised repairs. As Beshty put it, “the residents are absent from the images, in much the same way they are absent from consideration by the city, its policymakers, and industries that choose not to take responsibility for their predicament. The corporate fascination with ‘flexible labor’ leaves these people stuck.” Beshty continues:

These works came out of the charged idea of homeownership in the American mythology. The first “recreational vehicles” (RVs) gained popularity in the U.S. in the mid-fifties. They were essentially industrially produced homes perched on the chassis of American-made trucks, and they were marketed as a democratization of American exploration, the idea that any family could, on short trips or family vacations, impersonate the homesteaders of American lore, and do so with all the conveniences of home. As this pursuit fell out of fashion, increasingly relegated to retirees, RVs, particularly the faded secondhand ones that have begun to grow in clusters in the suffering neighborhoods of post-industrial U.S. cities, indicate not a sense of personal exploration, but the impermanence and insecurity the American working poor must grapple with. These decaying corrugated metal containers perched atop aged semi-functional powertrains accumulate in the back allies of working-class neighborhoods in otherwise prosperous cities like unattended piles of autumn leaves; skeletal traces of previous life, and the canceled promise of a secure living wage, blue-collar jobs, and the social mobility the city once guaranteed. They, like the working poor they house, seem under constant threat of simply being blown away by a sudden change in air currents, whether by a shift in the municipal enforcement of vagrancy laws, which is a constant threat that sometimes makes these improvised neighborhoods disappear overnight, or the disintegration of the homes themselves into piles of detritus. Many are integrated with the mounds of debris that line the streets, abutting makeshift enclosures comprised of discarded shipping pallets, tarps, plywood, sheet metal, and various other industrial effluvia local businesses leave on curbs in the dark of the night to avoid the costs of sanctioned disposal. It is watching the American home dissolve slowly into its constituent parts, reduced to remnants and raw materials, their facades still emblazoned with the cavalier ideals these vehicles once represented, ‘Commander’, ‘Pinnacle’, ‘Voyager’ and so on. They are exemplary of the post-war economic boom of the U.S. and the ‘American dream’ it wrapped itself in, the promise of homeownership democratized and industrialized, and later made mobile, brought to a rusty, squeaking halt in the once bustling arteries of industrial might (these particular homes are located on the now derelict Union Pacific Avenue, named for the once powerful rail line whose main Los Angeles base of operations was located there). It bears mentioning that these works quite consciously take their form from art’s forays into the urban milieu, from Atget’s images of old Paris to Walker Evans’ “Homes for Americans,” Ed Ruscha’s various book treatments of the American architectural vernacular (such as his “Every Building on the Sunset Strip” and “Real Estate Opportunities”), Dan Graham’s “Homes for America,” and Lewis Baltz’s “New Industrial Parks of Irvine California” to name a few.

Beshty’s work combines essential strategies of contemporary art practice while questioning art as a practice. As he states, “I think of my practice as an ecosystem, a set of interdependent relations that have an internal logic, which is dependent on other systems that have their own logics. The purpose of an art practice isn't just to make things, but to create meaningful relations between things.” Beshty’s work goes beyond theoretical ideas by addressing the art system as such: its production processes, its shipping and handling procedures, as well as its modes of presentation and the sale of artworks. Art is considered part of the economic, as well as the social system, and the work itself makes this condition visible. Beshty also pays tribute to the so-called “neo-avant-garde” of the 1960s. If his work often appears like Minimal or Conceptual art, the differences are clearly stated when he has technical staff handle the precious surfaces with their bare hands, leaving traces of the handling on the pieces as part of the process the work goes through in the art system. Similarly, his procedural works like the FedEx series are marked by their transit, evolving through time and exhibition, and, thus, index their changing status between regular goods and art objects depending on their context.

In addition to showcasing the expansive nature of Beshty’s practice, the bodies of work on view are united by common themes of travel and circulation as they persist in his work, reconsidered through the lens of the recent pandemic and economic suffering it produced. Conceptually, the exhibition in and of itself plays a role in the circulation of the work, according to Beshty, “The exhibition hall (a commercial gallery, museum, online viewing room, etc.) is a distribution hub for the work of art, expanding the circulation of artworks through the actions and activities that take place in these contexts, and in so doing, they are also producers of an artwork’s meaning.”